Trending News :
You are at:Home»Regulation»Bitcoin and Regulation: Lessons from when Skype started
By Spiry Dot Com on May 27, 2014 Regulation

Michael Jackson, former COO of Skype and current venture capital investor at Mangrove Capital Partners, explores how bitcoin companies can learn from the early struggles Skype had with regulators across the globe. 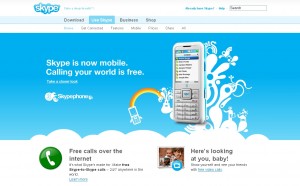 For all the differences between Skype and bitcoin, there are many similarities.

Both products use fundamental changes in technology to enable new opportunities, and they both remove the existing organizational hierarchy of their respective industry. As such, parallels can be made and valuable lessons can be learned from the early days of Skype.

The bitcoin industry seems to be adamant that bitcoin is a currency and bitcoin companies are financial institutions. This was very much in evidence at Bitcoin2014, where all major actors were describing their progress to ‘regulatory compliance’.

From the inception of Skype, we could have said that the firm is a telco (telecommunications company). We could have decided to apply for telecoms licences all around the world and customize the product to both match and support the vagaries of different rules and directives.

At that time, the world had changed from large, government-owned telcos to a new paradigm. Had we tried to establish Skype as a telco, rules and perversity would have appeared, driven by a dangerous combination of lack of knowledge, good intentions and political pressure.

We would have entered the same world that many bitcoin operators appear to have chosen, a world in which our ideals would have been suppressed by forces outside our control.

Let’s try and learn from previous successes. Let’s see if we can navigate the complexities of the legal and regulatory situation, using some of the experiences and techniques that were adopted by Skype – techniques that could help reduce any regulatory influence or restrictions on bitcoin.

Regulation is not a given

To argue otherwise would be to argue that anyone who makes cables, or handsets, or even the bricks and mortar and relays and batteries for telephone exchanges is also a phone company. This would be truly absurd. If Skype, the company, closed down, the software would still be in the wild and the whole world would still be able to talk for free.

We, the bitcoin community, need to make these arguments better. The default position of the products and services derived from bitcoin must be that they are not to be regulated. They need not be, and the existing rules need not apply. They may apply in intent, but often the wording is poor, unsuitable and can be argued to be irrelevant.

To put it bluntly – every bitcoin actor should be reading the law very carefully and finding the loopholes. You should all invest a great deal of time in this – it is hugely important. For example, are you really moving ‘currency’ or are you simply exchanging some sort of token?

So far, many of the proponents of bitcoin have been taking entirely the wrong approach – making claims that attract a raft of unwanted rules and regulations.

In the latest turn of events related to the disputed legal status of digital currencies in Poland, a local tax...