Mining with your Hard Disk (Proof-Of-Capacity)

Mining with your CPU or GPU is now outdated. Now, you can use your hard drive to mine or so it seems to be the case with BURST, a new digital currency that employs a new algorithm for proof-of-capacity (P.O.C) mining that uses your HDD to mine. Miners pre-create chunks of information recognized as plots which are saved on your disk. The size of your plots determines your mining efficiency. Every block the miner will skim through the saved plots, and come up with an amount of time until it is able to mine a block if another block hasn’t yet been found. After reading through the plots is complete, your hardware can idle until the next block. It seems really fascinating and that is why we want to take this crypto currency under our consideration. 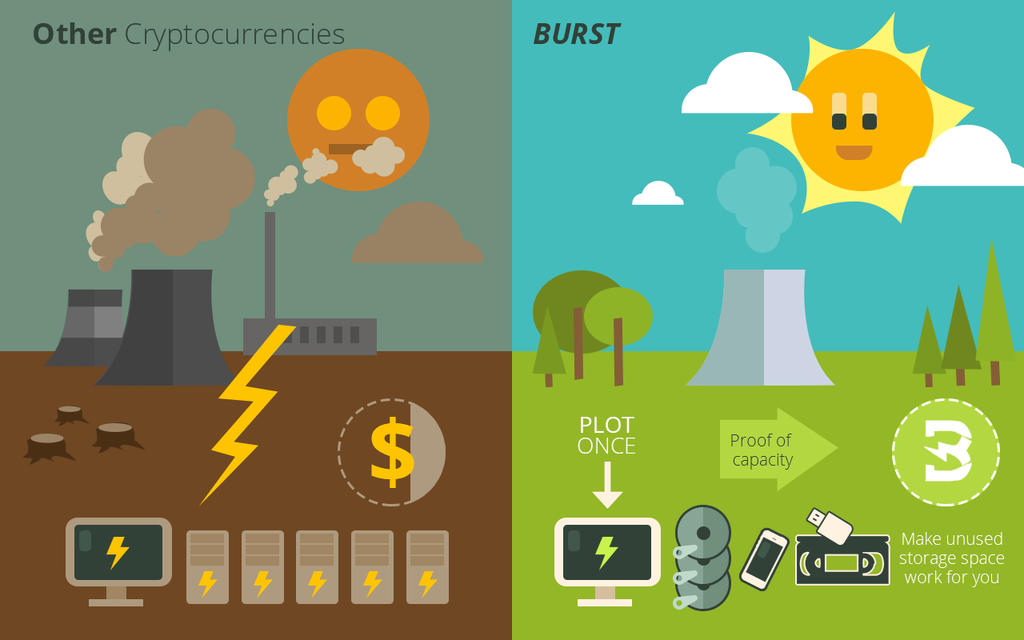 Meanwhile, Smart Contracts are here! You can actually start writing customer ready Smart Contracts using BURST, sometimes referred to as Burst Coin, straight from its wallet today! If you require assistance you can always ask one of BURST programmers to write one for you!

Smart Contracts enable many things to be run on the blockchain which would otherwise have to be individually planned in, or reviewed by, a core developer, and to meet maximum trustlessness, reviewed by all the miners as well. On the other hand, Smart Contract code can be modified to specifically to suit the needs of anyone who wants to run such contract. The reason for Smart Contract’s name is that they allow people to agree on a piece of code ahead of time and trustlessly know that if they submit the code to the network, then it will be completed as requested. The code’s arguments can be modified as desired, before its submission to the network.

For the sake of simplicity, we have chosen a traditional Lottery case. During a fixed period of time, participants were allowed to send BurstCoins to the Lottery account. Using a Turing Complete system built into BURST’s blockchain, it became the first ever program to run on top of a blockchain in a trustless, decentralized manner. When participants submit coins to the AT (Automated Transaction) account, these transactions are processed to a random ticket. After a pre-programmed number of blocks the AT lottery pays the winners the total amount of the tickets purchased. This proof-of-concept will stay in history as the first of its kind. Even more advanced SC’s and AT’s will be implemented soon, such as crowdfunding, a Lottery like this can be created by every BURST user. We will, of course, report on further development of BURST.

Clearly, Smart Contracts can be used in many situations, but since this innovation is fresh, many possible uses have probably not even been thought up yet. You get all this in one single coin, BURST. They will not stop there though, they will continue to develop this amazing feature!

Being an innovative fork of Nxt, BURST also offers an Asset Exchange as well as a Marketplace built directly into the wallet. Several other features such as escrow, which allow for a middleman who can approve or reject transactions as certain conditions are being met, or subscriptions where people can subscribe to in order to have a certain number of BURST automatically deducted from their account and forwarded to another one on a regular basis, are very useful and are built in as well.

For months of continuous development since its launch in August 2014, BURST has offered all the above, but now we add another feature to this exceptional coin. Once again BURST is the first, this time with Turing complete Smart Contracts, making BURST a true second generation cryptocurrency. Development continues unwaveringly, community grows, and network size is around 10 petabytes.

In the end you should join them to revolutionize the digital currency world! Burst Network deserved our attention because they are doing it right , without requiring big IPO’s only their time to deliver what other coins like Etherum & Counterparty promised and didn’t deliver.

Coinbase Has Launched The First Regulated U.S Based Exchange