Coin Magi is a peer-to-peer global currency that facilitates instant payments to anybody in the world. Magi is decentralized and operates with no central authority or banks, this is very general attribute to all cryptocurrencies. But Magi has something special, is an M7M PoW/PoS-II hybrid coin.

There are some issues in the community which faces the original Proof-Of-Work and its rewarding system that is implemented in almost all other Proof-Of-Work based coins. This issue, it is in Bitcoin also which is favoring the early adopters with a much higher payout than those that join the network later on.

Magi has learned from the mistakes of such systems and has introduced its own special rewarding system and its own unique PoS II. It is also of great significance to remark its M7M algorithm, which is only mineable with a CPU at this stage.

So what we understand so far Magi Coin [XMG] solves the following issues:

The average constant block reward has increased profit-driven hardware race and an anxiety of the global energy waste. In fact, the development of powerful hardware is changing the decentralized and open the environment of cryptocurrency. The increase of block rewards with growing of the network difficulty at the initial mining process, it allows individual miners to earn almost equal quantity of coins.

Magicoin has removed totally the competitive hardware race with their new M7M algorithm. M7M it’s based on the M7 Proof-Of-Work algorithm introduced by XCN, they have done well on choosing cryptographically secure hashing functions; M7 hashes the multiplication of seven hashes by apply SHA-256. The M7 algorithm has been proven a success. There was a period when M7 is only minable through CPU. Regrettably, as of this time both Nvidia and AMD miners have been implemented, that makes M7 like any other algorithms.

Under this scheme, Coin Magi have carried out modifications to the M7 algorithm transforming it to M7M. The basic idea is that GPU does bad work in handling complicated mathematical functions in association to a CPU. The resultant algorithm significantly increases the difficulty of implementing GPU miners. This idea and Coin Magi implementation could be very promising for future use in CPU coins. The nature characteristic resists to GPU and hence ASIC too. The additional advantage is that the algorithm is not memory hard which means a lot of energy consumption during mining processes. The energy consume in Bitcoin mining has now been a world-wide concern.

By doing these modification and improvements, Coin Magi keeps the network safe & more fairly distributed among real people instead of mining farms. Making feasible for a regular Joe to enter in cryptocurrency market. We salute this kind of cryptocurrencies since they are promoting the real idea of fair distribution & decentralization.

The Magi PoS II system also guarantees that people with the largest share of coins in circulation do not have an unfair authority over those with smaller holdings, by defining the coin maturity based on the portion of XMG held.

The Proof-of-Stake II has a block time once at 1.5 min; Once P.o.S is initiated the blockchain will go faster than it is now. The Proof-of-Stake II earnings are proportional to the annual interest and coin ages. The major weakness in the traditional PoS is a possibility of attacking the network by mining a number of blocks ahead of other PoS miners, which can be done by accumulating significantly through.

Weakness of the old Proof-of-Stake System

PoS-II avoids the above two situation and offers much better security. 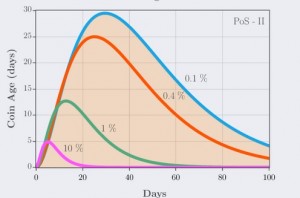 How does MagiCoin avoid the issues using Proof-of-Stake II system? By increasing its interest rate equally with the network weight, meaning that the more coins staked the bigger interest the network earn. As shown in Fig.1 the user that holds 10% gets less interest than the user that holds 0.1% of the coinage. Which it makes it fair and anti-hoarding, for dump propose, getting Coin Magi out of any get-rich-quick scheme’s. We believe that this a very well tough system which will improve their overall system.

Magi was launched on the 15th of September after thorough testing, with only 25,000,000 XMG to be mined through its blockchain. It is currently being traded on the Bittrex market for 0.00004700 BTC.

As this coin has a limited mining method, we can be assured that it is currently protected from the large accumulation and sells that is often seen on other coins. This platform has great potential to rise above the crypto ladder and set a new standard of mining standards and fair distribution through a fully decentralized platform.

Overal Coin Magi[XMG] is an interesting new way for miners to earn rewards on a fair distribution model to avoid, large mining farms, and GPUs that cut the opportunity for regular miners to benefit. Plus, there is no incentive for early adopters, in fact, as the community grows its adoption, miners earn better payouts as a whole community. PoS-II is active and in hybrid mode. You stake the earned coins. Not to mention, it’s pretty rare.

The Famous Electronic Library Mapofcoins.com Got a Large Update