Bitcoin along with many other cryptocurrencies of its generation have reformed the world of today. Though very few are aware of It is potential and future importance, the decentralized ledger is a solid basis for applications beyond our imaginations.

During the past year, the light was shed on the criminal activities of various governments around the world which involved illegal and abusive mass surveillance and data collection. The crypto world was deeply struck by this revelation and started rooting for coin functions that would guarantee their right to both financial and communications privacy.

A New Fighter That Protects Our Financial Privacy Has Emerged

After all this fight to protect our right to privacy which is the most important right of all, a new cryptocurrency emerged, it is called Navajo Coin.

Navajo Coin introduced a completely unique state-of-the-art anonymous technology. Is using decentralized nodes, a subchain, and double encryption right from the nodes guarantees true anonymity while still maintaining the option of having fully transparent transactions and in no way bloating the backbone of the system (main chain). The inputs and outputs will be in such a way that the origin of the transaction, as well as the recipient, cannot be correlated, linked to one another, or be traced in the block chain as there will be no evidence of it. This technology will, therefore, is implemented in the Navajo Coin Wallet Version which has been released on the 9th of March 2015.

This System is a Hybrid Crypto System and is a hybrid of with Centralized and Decentralized Operations. You can notice how complex is their anonymity system in the scheme below. 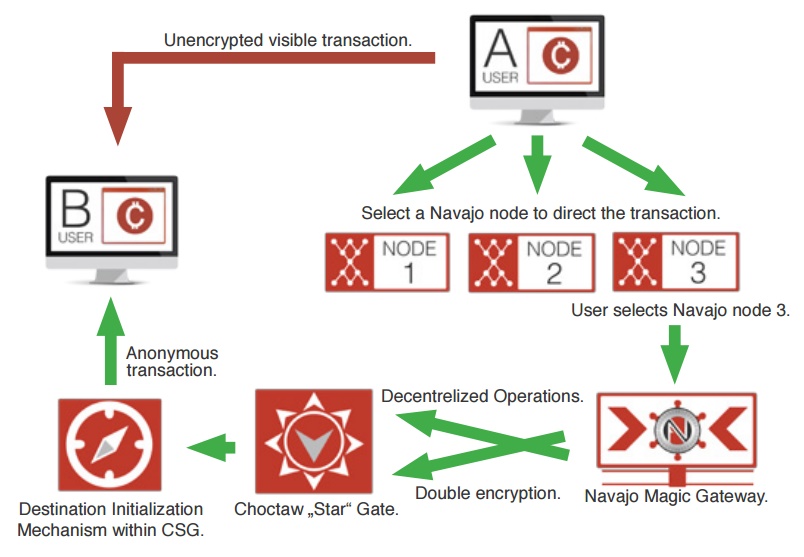 1. The Navajo Coin wallet talks to the Navajo API and asks for a random Navajo Magic Gateway (NMG) send NAV through anonymously.

2. This will be the beginning of the anonymous transaction phase.

3. The technologies discussed here are highly anonymous in nature thus you will experience a real sense of Anonymity. This System is a Hybrid Crypto System and is a hybrid of with Centralized and Decentralized Operations.

4. The incoming NMG node talks to the API and asks for a random Choctaw Star Gate (CSG) to send the coins out to the destination.

5. The API finds a random CSG, checks that it is running and able to process outgoing anonymous transactions, then sends its details back to the NMG.

6. The destination address is decrypted then re-encrypted with a new key and sent through the private Navajo Subchain.

7. The NMG strips the destination information from the incoming transaction, mixes the coins with other pending transactions and sends the Navajo coins to the CSG in a series of small, randomized transactions to further obfuscate their route.

8. The CSG node receives the subchain transaction and decrypts the destination address from the transaction. The CSG then sends out the correct amount of Navajocoins to its intended destination in a series of small randomized
transactions.

So How The Transactions Work?

These transactions are sent the same way as any bitcoin transaction. The coins are sent from the sender’s wallet directly to the receiver’s address and are fully visible and verifiable on the blockchain.

In order to conduct an anonymous transaction, the wallet will need to select a node through which the transaction will be channeled, present the recipient’s address, and get into Navajo mode through an available GUI button.

The nodes are decentralized and as transaction volume grows, more nodes will be added.

When a transaction is received at the Anonymizing node, the destination information is encrypted by a cryptographic hash function and then that information is broadcasted through the subchain to instruct the outgoing node where to send the NAV funds. The node is the gateway to the subchain.

The NMG(Navajo Magic Gateway) and CSG(Choctaw Star Gate) are the most important part of the entire operation and work in conjunction. They run on an independent subchain and are of course fully decentralized. The NMG is the decryption mechanism and the CSG is the gateway back to the main
chain.
The NMG receives the encrypted transaction information that only includes the destination address and the amount, decrypts it, then re-encrypts it with another public key and relays it to the CSG through the subchain. The CSG receives the subchain transaction, decrypts the destination information and verifies the transaction integrity before broadcasting the final transaction on to the main chain; sending the coins to its recipient address in smaller, random denominations.

The recipient will receive the amount of coins intended to be sent to their destination address, therefore completing the transaction and thus the coins in no way can be traced back to the original address through any analysis of the Block Chain / Public Ledger, the subchain or in any other way. What appears on the main blockchain is a transaction with a destination and amount only and without an origin.

The Coins received in this way are in no way traceable to the original and there will never exist documented proof on either chain linking any addresses. To counter the type of analysis where one would just look for similar amounts we have mixed and then split the transactions into a smaller random denominations.

The efficiency of the system plays an important role in evaluating this system. It takes 3 confirmations all within the network for the coins to be sent and received using the anonymous technology, therefore, there are no disadvantages of using the technology against the conventional sending and receiving of coins between two addresses.

The nodes will be decentralized, but to begin with they will be maintained by the Navajo Coin Foundation. We are working to find a secure way that we could distribute the code for users to set up their own nodes while still being able to guarantee the integrity of the Anonymous Network.

You Can Even Chat Anonymously

The next feature they are working on it will be an anonymous, decentralized messaging system that runs on the main network. The idea being that it will allow users to share information by broadcasting encrypted messages using a decentralized subchain in the same way that the transactions are conducted. They consider the messaging system to be another backbone of another subchain features that they plan on releasing it.

The on Wallet Messaging service will have its own subchain which will act as a register of nicknames. Nicknames will be tied to addresses instead of having passwords. An available balance will also be required to chat. The reason for this is to prevent spam and abuse of the system. Since the system is decentralized, banning someone is in effect not possible. However, we have come up with a feature where each node is able to ban/stop listening to a nickname for a specified period or forever. If all the network does the same, then the user is as good as banned.

We were impressed by Navajo Coin Anonymity Technology, finally an easy to use anonymous system to send money across the world. We have always been intrigued by the hard way of doing that even especially with Crypto Notes where you need to write commands and be careful of how you write them to not do any mistake. But now we have a classic Bitcoin wallet system with an amazing decentralized anonymity function based on subchains. I believe this is what we were waiting for to acquire our financial freedom back from the oppressive states that are across the world.

UPDATED: Their wallet is launched with a few new addition like SSL for all communcations to the API servers and the encryption of the destination address with a generated openSSL public key before it is broadcast into the blockchain. They have also worked to refine their sending algorithms and will continue to try and make this service better and more secure. This guys really work!

Stake Interest 20% for the first year

5% for every following year

WASHINGTON, NC. – Franko (FRK) users will be able to use their Franko Wallet to sign in to third-party websites,...